In her new book, A MURDER IN MY HOMETOWN, Rebecca Morris writes about her investigation into the unsolved murder of a high school classmate in Corvallis, Oregon fifty years ago. Set against the backdrop of 1968, one of the most eventful and dramatic years in America, “A Murder in My Hometown” is part true crime and part memoir. 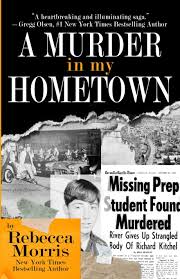 On a fall evening in Corvallis, Oregon in 1967, 17-year-old Dick Kitchel, a senior at the high school, disappeared after attending a party. Ten days later, his body was spotted by two children as it floated down the Willamette River. He had been beaten and strangled.

The investigation into his murder played out during one of the most dramatic years in America. Life in Corvallis, a college town, had offered a protective, idyllic life to many. But in 1967-68, Viet Nam, a presidential campaign, the assassinations of Martin Luther King Jr. and Robert Kennedy, and the murder of Dick Kitchel changed that.

Thank you, Delilah….my favorite interview of all time! It was great speaking with a woman who grew up in the same era…

If you would like to be considered for an interview on ImaginePublicity on Air please email contact@imaginepublicity.com with a brief synopsis of your topic.