Diane Fanning appearing at VA Festival of the Book

Edgar award nominated author Diane Fanning will be appearing at one of the most exciting and prestigious book events. The 21st Annual Virginia Festival of the Book, “a five-day hurrah for books, authors, and reading” is presented from March 18-22 in Charlottesville, Virginia locations and is the largest community based book event in the Mid-Atlantic region attracting hundreds of well-known authors and approximately 20,000 visitors.

Fanning will be appearing at two events on Saturday, March 21.  Crime Wave: True Crime Stories from 2-3pm along with Daleen Berry, Judy Melinek and T.J. Mitchell to discuss the details of the crimes behind the non-fiction stories they’ve each written. Her latest true crime book, UNDER COVER OF THE NIGHT, is a story of sex, greed, and murder set in the small town of Forest, Virginia.

From 4-5pm she will appear on the Crime Wave: Murder From Another Time and Place panel along with authors Victoria Dougherty, Joseph Kanon and Sarah Kennedy talking about fictional characters, story lines and suspense in their thrillers. Fanning’s book, SCANDAL IN THE SECRET CITY, is the first in her new series featuring Libby Clark, a scientist working for the government at a secret location during World War II. She is also the author of the Lucinda Pierce mystery series.

Past participants in the Virginia Festival of the Book read like a “who’s who” of celebrated authors, as well as debut authors and topic experts. Sponsored programs are open to the public and range from “traditional author readings and book signings to a StoryFest day of children’s authors and storybook characters; from a panel on how to publish a novel to a discussion on running a book club to a workshop on bookbinding.”

For details on programs and locations, please visit the website VABook.Org

Diane Fanning is one of America’s premier crime novelists and true crime authors.  At the top of a genre that often gets a rap in the literary world, Fanning brings esteem, good research and due diligence when presenting a criminal case in book format. 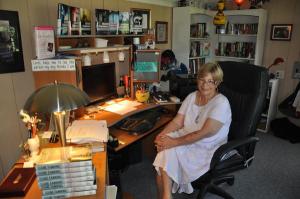 Before writing her first true crime book Fanning wrote for magazines,television, radio and ad agencies in Virginia, earning many awards. She moved to Texas where her career in true crime writing blossomed, and has since returned east to make her home in Bedford, Virginia. She has served on the executive committees of the Writers’ League of Texas and the Heart of Texas chapter of Sisters in Crime and is also a member of Mystery Writers of America.

Diane Fanning Appearing at Virginia Festival of the Book