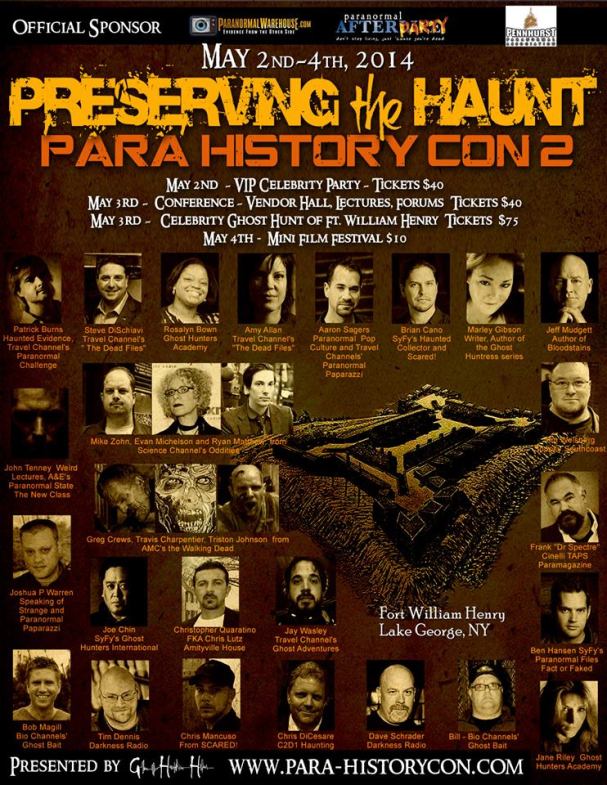 The intersection of history and the paranormal is just one juncture of the Para-History Con 2 “Preserving the Haunt” Conference May 2-4, 2014 at Fort William Henry in Lake George, NY, and features a presentation by BLOODSTAINS author, Jeff Mudgett. In the company of many of the nation’s best known ghost hunters and paranormal personalities, Mudgett’s ancestral history as recounted in BLOODSTAINS will be revealed to the attendees.

For those not familiar with H. H. Holmes and his “Murder Castle” built during the construction of the  World’s Columbian Exposition in Chicago in 1893, Jeff Mudgett’s book, BLOODSTAINS, tells the story from a completely new angle, a personal history combined with methodical research into an ancestor no one would willingly claim. Herman Webster Mudgett was a swindler, a con man, a womanizer and, at his worst, H. H. Holmes, the most atrocious serial killer of all time. At age 40, Jeff Mudgett learned that he was descended from this incarnation of evil and set out to investigate what was known, and unknown, about his nefarious great-great-grandfather. The result was BLOODSTAINS.

On July 26, 2013 The History Channel aired the story of Jeff Mudgett’s investigation of long, lost relative, Herman Webster Mudgett, aka serial killer H. H. Holmes, by re-creating his experience written in Chapter 27 of BLOODSTAINS.  Viewers were taken down into the bowels of the remains of the infamous “Murder Castle” located at 63rd and Wallace in Chicago, now the site of a United States Post Office.

Mudgett believes that an excavation of the site of the post office, similar to the federal exhumations at the Dozier School for Boys in Florida, would reveal the souls of hundreds who met their untimely deaths at the hands of H.H. Holmes. Since the 1890’s they have been trapped, and Mudgett feels it’s the right thing for the Federal Government to do in order to set history straight and identify the ancestors of hundreds of families who vanished after walking through the doors of Holmes’ hotel.

He will present to the audience evidence uncovered while researching and writing BLOODSTAINS, including evidence that Holmes quite possibly is the identity of Jack the Ripper. Although only one chapter of BLOODSTAINS is devoted to the theory, the evidence definitely warrants a deep look.

For detailed information and registration for the Para-History Con 2 Conference, refer to the website: Para-HistoryCon.Com

Jeff Mudgett is available for keynotes, speaking engagements, workshops and presentations including not only the book BLOODSTAINS and the information contained, but he also speaks to audiences about writing, publishing, and epilepsy.

Contact ImaginePublicity to schedule Jeff Mudgett for your next event.  Tel: 843-808-0859  Email: contact@imaginepublicity.com