Early in the morning hours of October, 29,1995, several calls came in to the Hartford Police reporting a female being dragged by a car. Investigators eventually found the mangled body of Leah Ulbrich by following a trail of blood and flesh, she had been dragged for over 4 miles, her life ending gruesomely. 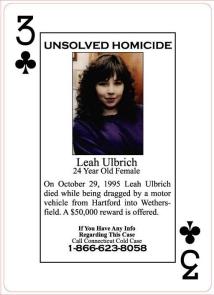 It was determined that Leah Ulbrich had either been pushed, or tried to escape from the man who was driving a sedan, reported as either a NIssan Maxima or Altima by witnesses, one who was stunned to see this unfolding and called from an emergency call box on the corner of Wethersfield Avenue and East Elliott in Hartford. Investigators are trying to locate this witness who may be able to assist in the case, from where she was positioned, it’s possible she may have seen the driver or the car in much more detail than others.

Leah Ulbrich’s son, Ryan, was 5 at the time of her death, and is a recent graduate of Eastern Ct State University with a degree in Criminology & Sociology. He would like answers concerning the death of his mother along with other family members. Ryan will remember his mother and how her untimely death has shattered their lives and how justice would help them all put the pieces back together.

It’s reported that Leah Ulbrich was a victim of substance abuse, but she had completed a year of rehab, was in recovery and taking control of her life when she was killed.  Robert Baskin, Ryan’s grandfather and Leah’s father says,  “People who knew her know what a wonderfully creative and expressive person she was,” he said. “This … was someone’s daughter, someone’s mother.” 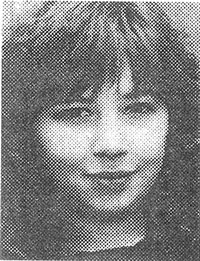 In November 2001, a joint investigation was initiated between the Hartford Police Department, the Wethersfield Police Department and the Cold Case Unit of the Office of the Chief State’s Attorney. At the request of the State’s Attorney for the Judicial District of Hartford, the Governor authorized a $50,000 reward for information leading to the arrest and conviction of the person or persons responsible for the death of Leah Ulbrich. The Division of Criminal Justice maintains a Tip Line to take information on this case. The number is 860-548-0606.

Shattered Lives: Can You Solve This Cold Case?