Watch the episode of Haunted History’s The Murder Castle and see first hand Jeff Mudgett’s journey through the basement as described in Chapter 27 of BLOODSTAINS.

On July 26, 2013 The History Channel aired the story of Jeff Mudgett’s investigation of long, lost relative, Herman Webster Mudgett, aka serial killer H. H. Holmes, by re-creating his experience written in Chapter 27 of BLOODSTAINS.  Viewers were taken down into the bowels of the remains of the infamous “Murder Castle” located at 63rd and Wallace in Chicago, now the site of a United States Post Office.

As described in BLOODSTAINS, employees of the Post Office refused to set foot in the basement, the door downward kept barricaded, and only certain parts used as storage, but not many had ventured into the winding hallways built by Holmes in 1893. Contained within those hallways were rooms he used to trap his victims, perform despicable experiments, and ultimately, dispose of the bodies. 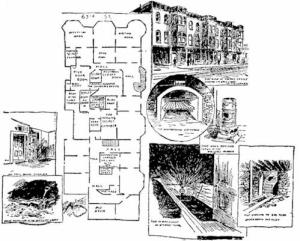 For those not familiar with H. H. Holmes and his “Murder Castle” built during the construction of the  World’s Columbian Exposition in Chicago in 1893, Jeff Mudgett’s book, BLOODSTAINS, tells the story from a completely new angle, a personal history combined with methodical research into an ancestor no one would willingly claim. Herman Webster Mudgett was a swindler, a con man, a womanizer and, at his worst, H. H. Holmes, the most atrocious serial killer of all time. At age 40, Jeff Mudgett learned that he was descended from this incarnation of evil and set out to investigate what was known, and unknown, about his nefarious great-great-grandfather. The result was BLOODSTAINS.

Jeff Mudgett’s description in Chapter 27 of BLOODSTAINS tells about seeing original bricks and foundations in the basement, many of them calling out  to him with the screams of souls lost for eternity because of the evil of one man. Viewers will watch the re-enactment with awe, traveling with the author down the stairway and into the belly of the beast for an unforgettable look at the presumed location where it’s estimated that  hundreds came to a gruesome end. His encounters with the spiritual world can only be classified as paranormal, or perhaps a personal battle with the devilish Holmes.

BLOODSTAINS is in the negotiation stages of being optioned for a future major motion picture, telling the story of not just the gruesome serial killer Holmes, but the added character of Mudgett himself and his mental, physical, and spiritual adventures while writing the book.

Mudgett is currently investigating whether Holmes was in London during the time of Jack the Ripper, and a composite and handwriting samples can be viewed on his site at www.bloodstainsthebook.com. Could these two men be one and the same? Could the mystery of the identity of Jack the Ripper be solved?  Mudgett presents the evidence in BLOODSTAINS and allows the reader to make their own determination.

Jeff Mudgett resides in Las Vegas, NV where he is working on two new books, Letting Love Live, which delves into the question, “can pure evil love?” The second book, Before the Eyes of Men, is a fictional account of Spanish gold off the  California coast. Jeff Mudgett is available for keynotes, speaking engagements, workshops and presentations including not only the book BLOODSTAINS and the information contained, but he also speaks to audiences about writing, publishing, and epilepsy.

From the episode notes:

The 1893 Chicago World’s Fair was a triumph of architecture and technology that offered 27 million amazed visitors a preview of 20th century. But a mere mile down the road from the fair, one man, H.H. Holmes, was making history in a far more sinister way. He had built a hotel designed for murder, which would later be known as “The Murder Castle.” It was a three-story, block-long hotel designed with trap doors, gas chambers and vats of acid all meant to aid a madman in his efforts to murder 200 people. Today, the spirits of Holmes’ forgotten victims appear to astonished witnesses, attempting to tell the truth behind a story that remains shrouded in mystery over 100 years later. From Holmes’ hometown in New Hampshire, to the site of his hotel in Chicago, to the final resting place of his youngest victim in Indiana, voices and visions reveal the shocking truth behind one of most evil men in America’s history and the country’s first serial killer.

with Author of BLOODSTAINS, Jeff Mudgett