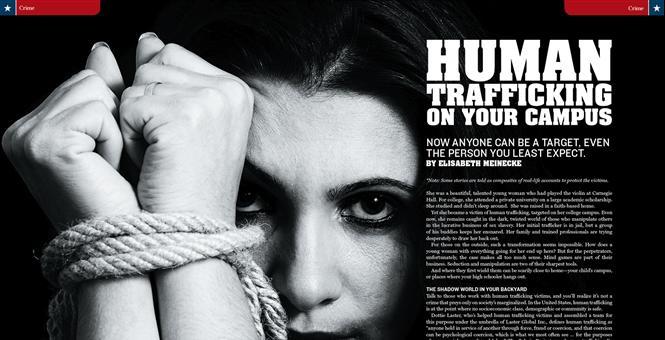 The August issue of the popular news magazine, Town Hall, features an article about human trafficking and its infiltration into mainstream America, our upscale neighborhoods and college campuses, recruiting young people who are seemingly academically successful and from stable families.

Columnist Elisabeth Meinecke reports, “Now anyone can be a target, even the person you least expect.”

Included is the story of a Carnegie Hall violinist who was attending a private university on a scholarship, targeted by traffickers on her college campus, and is still ensnared by the coercion of the group of traffickers. She comes from a good faith-based family and is not the typical victim type, not necessarily a vulnerable target, other than perhaps naiveté and a lack of street smarts.

Meinecke pulls the readers into the arduous work of Dottie Laster of Laster Global Consulting and the increase of cases coming to her from such families as described, mainstream America being hit harder by traffickers using a multitude of tactics. Laster explains the “Romeo pimp“ and how he/she is able to literally invade the thought processes of otherwise intelligent youth, usually girls, using standard seduction techniques until he has her thinking she is in a loving relationship.

The article goes on to explain the steps the predators take in the psychological journey of a victim in the grooming process, such as creating trauma in the form of gang rape, then purposely consoling her to create a deeper bond, then isolation from everything she may know as normal, rewriting her own history.

“The psychological component of this industry is powerful—so powerful, in fact, that it can lure a victim back into a sex trafficking situation even after she’s initially fled the perpetrator.” says Dottie Laster.

The feature goes on to tell the story of another victim of trafficking through the grooming process, the way of life she experienced, and her ultimate escape and survival of years living a horrendous nightmare.

Simple economics teaches us the theory of supply and demand, the same theory goes towards the fastest growing global crime, human trafficking, where the demand for it is exceeding the supply of young people to fulfill the fantasies of those who purchase them for sex. Unfortunately it’s usually the victims who are initially arrested on prostitution charges, and although most states now have stricter laws on the books concerning human trafficking charges, they are yet to be tested to the full extent successfully. The other side of the demand is the buyer, rarely identified, and rarely arrested and charged with illegal purchase of sex from minors. 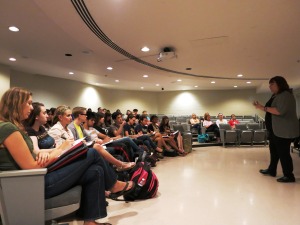 Dottie Laster continues to reach out to universities and colleges to speak to students, faculty and parents on preventative measures that work to curb the hold traffickers are gaining on America’s campuses. Regrettably, many campus leaders don’t understand the scope of the problem, and in some cases are unwilling to respond to the growing crime not wanting to create fear among their students and families.

Laster offers parents, co-eds and leaders appropriate guidelines to follow when preparing their children for their college years along with several preventative measures. She has been actively speaking to high school audiences over the last year with the hope that as the students move towards the independence of college life they will at least be aware of the issue and educated well enough to be better prepared if a situation should arise.

Dottie Laster is featured in the documentary on sex trafficking in Latin bars and cantinas, The Cantinera, and will be the subject of an upcoming television show tentatively titled Project Red Light.

Dottie Laster is available to give presentations to all grade levels and classes, as well as law enforcement and government agencies, organizations, churches and community groups.