It’s a crime that innocent people are so often wrongfully convicted and sentenced for crimes which they did not commit. It’s a crime that even after exoneration many of the exonerees continue to carry a criminal record with them making it almost impossible to get a decent job, make a living, and carry on with their lives. It’s a crime that some of them are put to death.

True Crime author Diane Fanning and Julie Rea met under most unusual circumstances while Diane was doing research for her book Through the Window. Interviewing serial killer Tommy Lynn Sells she was able to get information about the crime which Julie was convicted and serving time for in prison ……the murder of her son, Joel.

Defended by a lone, public defender and outmatched by three opposing prosecutors, Julie was convicted on March 4, 2002, and sentenced to serve 65 years in prison.

On May 31, 2002, just weeks after Julie was sentenced, ABC 20/20 aired her story. Diane Fanning, a true crime author on serial killer Tommy Lynn Sells, watched the program. She corresponded with Sells. Without providing him when this crime occurred, Sells wrote back and asked her if this murder happened two days before his Springfield, MO murder. On Oct. 15, two days after Joel’s murder, Sells abducted and killed 13 year-old Stephanie Mahaney. He was indicted for that murder by a grand jury after he gave details that only the killer would know.

A year later, author Diane Fanning’s book Through the Window was released. She detailed Sells’ confession to the murder for which Julie Rea Harper was convicted. Bill Clutter, now Director of Investigations for the Project, led the investigation to corroborate Sells’ confession.

Evidence turned over to authorities and testimony given at trial by Fanning was instrumental in having Julie’s conviction overturned and led to Fanning’s receipt of the Downstate Illinois Innocence Project award, The Defender of the Innocents.

On June 24, 2004, the appellate court vacated Julie’s conviction and ordered her immediate release. As she was set to take her first step out of prison, prosecutors re-arrested Julie, ignoring overwhelming evidence that she was innocent. Supporters quickly rallied and raised $75,000 in less than a week’s time to secure her release on bond. Instead of seeking justice as new Supreme Court rules require, prosecutors sought to convict her again.

Jury acquits Julie: On July 26, 2006, a jury in Carlyle found Julie not guilty of killing her son.

There’s so much more to this true crime story to hear! 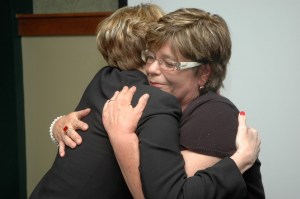 For information about Diane Fanning and a complete list of her books, please visit her website: DianeFanning.Com

Attorney MARGARET MCLEAN is a law professor, former prosecutor, and on-air legal analyst.  She is the author of the critically acclaimed legal thriller Under Fire, which features an arson and murder trial (2011, Tor Forge Macmillan).   Her second novel, Under Oath, (April, 2012) is about the code of silence murders in Boston.  She has co-written a dramatic courtroom play, based on Under Oath, which is in development with the Playwrights/Directors Unit at the Actor’s Studio in New York City.  She is currently working on her third novel, Under Treason. She was hailed as one of the next faces of Boston crime fiction by the Boston Globe.