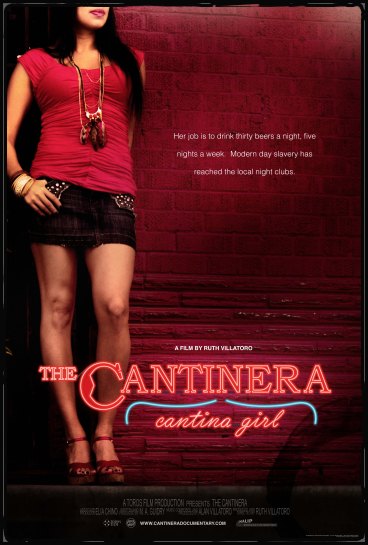 The Cantinera exposes a niche of human trafficking in the United States where latin women drink and prostitute themselves for a living in latin bars or cantinas by means of force, fraud or coercion.

Through the story of three women, the film navigates through the virtually unheard of subject from the perspective of a cantinera, an advocate and a vigilante.

The film travels into the cantinas where women drink up to 40 beers a night, five nights a week.  An upclose look identifies the strategies of traffickers who stage their operations so the victims look like the perpetrators and the cantina a legitimate business.

The Cantinera tells the story of hope in the midst of modern day slavery as the women confront enslavement, addiction and second chances.

Human trafficking is one of the largest money making crimes in the US and globally. Feeding on vulnerable women, men and children in a variety of industries, it’s web is reaching far into every city and town, even YOUR neighborhood. While most traffickers find their easiest victims among the poor or immigrant population, there is an increase of recruiters grooming their victims in high schools and those from affluent backgrounds as well.

The Cantinera Documentary seeks to spotlight what’s happening behind the facade of the many cantinas sprouting up all across America, not just in the border states, but reaching into a segment of our population often neglected and especially vulnerable to exploitation.

Cantinas are set up as a legitimate business.  They have some form of liquor license (depending on the state’s requirements). Cantinas that solicit waitresses may expect the cantineras to meet a quota of liquor sales or face consequences.

Cantinas may serve as a hub where clients meet the prostitute, but the act of prostitution happens in an adjacent home, nearby hotel or “outbuilding”.  Many times this method is preferred as the cantina is absolved of any criminal acts, placing blame on the “willing” victim.

Two strong advocates working for the abolition of modern slavery, Dottie Laster and Cat French, are followed through the back streets and the world of the cantinas. Viewers will have a front row seat to watch how they find the signs of trafficking and how they rescue and restore it’s victims, often at great personal risk.

Ruth Villatoro, a passionate documentary filmmaker, expertly crafts the film to showcase how the cantinera is groomed, recruited and coerced to perform under threat of personal harm or harm to her family. Nightly she is expected to reach her quota of liquor sales, often drinking up to 40 drinks a night herself to meet that quota, and to engage with those who are there to buy her services. Their stories are gritty, raw, unbelievable, but true.

Recruiters scout and target vulnerable females.  They use various predator tactics including manipulation of emotions and promises of legitimate work. Perpetrators use force, fraud and coercion as means to instill fear and control over the victims. Threats are used to intimidate the victim.  These include physical or sexual assault to them or family members.

Recruiters and traffickers prey on the vulnerabilities of young women and exert their control over them through fear, the greatest motivator to perform. Living in constant distress the cantinera finds it difficult at best to leave the life they’ve been forced to endure, clinging to the only thing they know, their traffickers and pimps.

Once rescued by advocates like Dottie Laster and Cat French, victims meet with specific terrors and new issues to be dealt with for restoration and the ability to live again within society.  In the United States we don’t have adequate resources to fulfill the specific needs of the victims, psychological, physical, and opportunities to become self-sustaining members in the job force.

Dottie Laster, along with providing training and education to agencies across the country,  also works directly with the rescued victims leading them to the proper services that are available. Through her association with the Bernardo Kohler Center and through Laster Global Consulting, Dottie has been instrumental in securing t-visas for victims of trafficking and in creating policies and procedures as organizations adapt to the old crime under new laws.

Cat French directs the Houston office of Exodus Cry, an international anti-trafficking ministry that is founded on and based in prayer.  She also is developing a six-week curriculum designed to train and deploy leaders who will combat modern-day slavery through systematic, fearless, informed intercession and outreach.

Watch for this film, it’s one that should be viewed with no preconceived notions that trafficking in humans is an epidemic in the US and the world.