You can hear Crime Wire Investigates beginning at 9 p.m. Eastern. 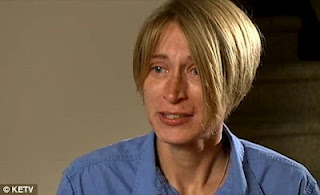 On Sunday, July 22, three masked men allegedly broke into the Lincoln, Nebraska home of Charlie Rogers, bound her wrists and ankles with zip ties, beat her and carved anti-gay slurs into her arms and abdomen.

The men also allegedly spray-painted a derogatory term for lesbians inside the home and tried to set it on fire, in what police are investigating as a hate crime.Rogers told police she was targeted because she’s gay. But some are questioning the veracity of Rogers’ account of the attack.

Charlie Rogers said that three masked men broke into her home, tied her up, scrawled anti-homosexual graffiti into her skin and wrote vile things upon her walls, as well as set her house on fire after pouring gasoline on it.

The outpouring of support has been strong, including prayer vigils being organized as well as mobilization of various political and rights groups.  It is a big story of a hateful and vicious attack.

Police have not found the three men who Rogers says attacked her, but authorities are treating it as a hate crime. She went public, she says, to counter and confront those who doubt her story.

For more information about Peter Hyatt’s analysis of the Charlie Rogers Case, refer to his website: http://seamusoriley.blogspot.com/2012/07/statement-analysis-of-charlie-rogers_28.html#uds-search-results

Joining Dennis Griffin and Crime Wire consultant and Statement Analyst, Peter Hyatt for a lively discussion about this and other cases where statement analysis searches for truth.