Long awaited new Apple App, the iEAA (Evidentiary Abuse Affidavit) is making its debut in the Apple Store on the Fourth of July.  Created by Susan Murphy-Milano, the EAA was developed into the Apple App format by 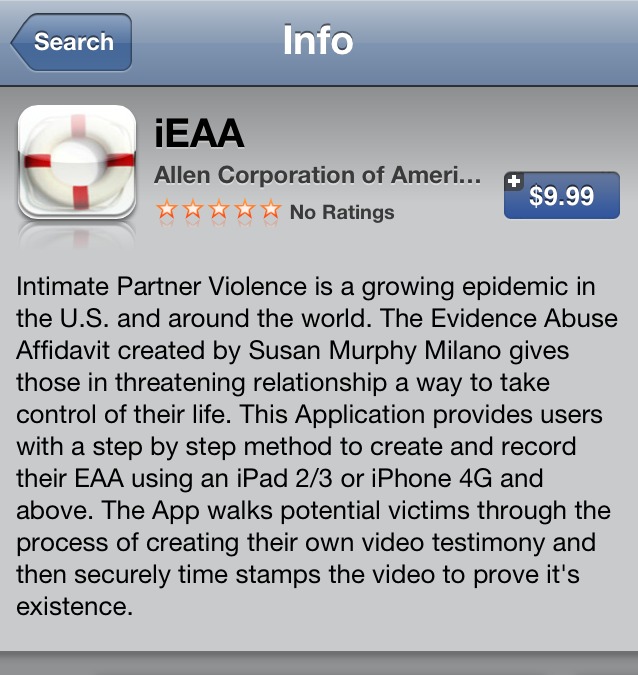 Myrtle Beach, SC………How fitting that on a day of independence and freedom, a victim’s independence from abuse and danger is now available.  The Evidentiary Abuse Affidavit is a revolutionary new tool described and detailed in the book, Time’s Up: A Guide on How to Safely Leave an Abusive and Stalking Relationship by Susan Murphy-Milano.  Since the release of the book on April 12, 2010, thousands have become aware of a new standard of safety which goes well beyond current planning measures for abuse victims. Used by hundreds of advocates and victims, they are the living testament to the success of the EAA.

Now, with the Apple App available, victims can do almost everything, including recording their video testimony on their iPhone, iPad or iPod. The Apple App makes it easier, safer and effective to create the documents needed for their specific, individualized safety plan. The easy to use instructions included within the Apple App walk the victim through each step, encouraging them all the way and letting them know their information has been created properly.

An all-inclusive website for information about the Evidentiary Abuse Affidavit can be found at DocumentTheAbuse.Com which also includes a Lethal Relationship Checklist so abuse victims, as well as law enforcement, first responders, court personnel and attorneys, can recognize often hidden dangers, understand the risk factors, and learn what to do with the information. Taking this assessment to the next level with the EAA is proven to prevent the ultimate abuse, homicide.

After working over 20 years in the field of violence and homicide prevention, Susan Murphy-Milano is realizing a dream. Unable to save her own mother in 1989, she has devoted her life and career to making sure the world is a safer place for abuse victims, often using non-conventional methods to keep them alive. The Evidentiary Abuse Affidavit is one such method, born out of the Stacy Peterson case.

Murphy-Milano says, “Had either Kathleen Savio or Stacy Peterson prepared an EAA, there would be no question of a prompt arrest. It also gives law enforcement and investigators information about the alleged perpetrator allowing the victim to speak from the grave on her own behalf, should that be necessary. Think of the millions saved in taxpayer dollars!”

This is the first phase of the iEAA App.  Murphy-Milano, Hosmer and Wetstone are working on an advanced version to be released by Apple later in the year, and are also working on a version for Android products for  maximum reach in the marketplace as well as being available to as many victims, advocates and first responders as possible.