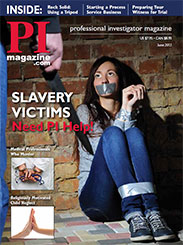 The cover story in the current issue of PI Magazine is Slavery is Alive in the USA and Beyond: Investigators Needed by Drew Robb.  Robb says, “One of the biggest barriers standing in the way of eradicating human trafficking is that people either don’t believe it or don’t want to hear about it…that’s why seasoned investigators are badly needed” one expert emphasizes in Drew’s article on this global epidemic of evil.”

Dottie Laster, of Laster Global Consulting and the Bernardo Kohler Center, was interviewed and her work featured in the article which is aimed towards private investigators and the importance of their role in human trafficking cases.

According to Dottie Laster, a lot of missing person or murder cases may have a human trafficking angle. “Investigators probably think to themselves, ‘This case just doesn’t add up,’ but don’t understand what they are running into.”  As a consultant and educator of investigators on the subject of human trafficking, she stated that professional investigators are in a prime position to help.

Addressing the potential for an income source for investigators, she said that as more attorneys become involved, there will be more trafficking work for investigators.  And the Trafficking Victims Protection Act (TVPA) includes provisions for victims to sue for civil damages, and have property and other assets seized. While money is a motivator for private investigators to become more involved, it can’t be the sole motivation. There are many non-profits which desperately need the type of services that only dedicated and well-trained investigators can provide.

The training consists of knowing  the indicators, the law and how to work specifically with victims of trafficking,

which are very different from other victims. “Due to language barriers, as well as threats and propaganda from their captors, they don’t believe anyone can help,” says Laster.  Dottie Laster’s training of law enforcement, private investigators, as well as advocates, is comprehensive and targeted towards the individual audience.

Laster explains the different areas where she has seen a prevelence of human trafficking, not just prostitution and commercial sex trade, but magazine sales, carnivals, rodeos, circuses, children’s choirs and construction trades. She says, “You have to learn to throw away the myths like all prostitutes are willing.”  “Any minor involved in prostitution, stripping or pornography is automatically adjudged to be a victim of trafficking ,” said Laster. “And any person putting a 14-year-old or under into commercial sex faces life in jail.”

To order the complete magazine please refer to the website for a subscription: PIMagazine.Com

To schedule Dottie Laster for training, seminars, workshops or events in your community, please contact: