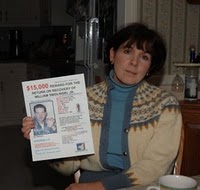 In August 2004, Billy Smolinski, a 31 year old resident of Waterbury, CT went missing. His family had difficulty in getting the attention of the Waterbury Police to investigate Billy’s mysterious disappearance. Waterbury Police told the family they had to wait 3 days to file a missing person report. By all indications, Billy was murdered and his body buried. Billy’s family agonized over the delayed police response and began lobbying to change police procedures associated with missing person cases. Recently, the State of Connecticut passed Missing Person Legislation that will remedy the Smolinski family’s experience and alter police procedures and training regarding missing persons. Billy’s Law goes into effect this fall. Billy’s mother, Janice Smolinski, joins the Crime Wire Team to share her son’s story and talk about her legislative efforts.

Earlier this month, the nation focused its attention on Tulsa, Oklahoma where the Tulsa Police Department engaged in a precedent setting 6 day standoff with a man perched several hundred feet atop a communications tower. The man has a history of mental illness, and went without food or water until the ordeal was resolved with the assistance of a retired Tulsa Police Department crisis negotiator, Tyrone Lynn. Crime Wire will examine the challenges police face on a daily basis when dealing with crisis and conflict situations such as the recent episode in Tulsa. Crisis Intervention and Conflict Resolution are critical police tools that are often overlooked and underappreciated by the general public. Vito Colucci and Tom Shamshak will share their experience and perspective on this interesting component of police work.