Jazz music was created in the early 20th Century, originating in Southern African American communities. As a male dominated genre that has delighted the hearts of billions throughout the world, it may leave you also wondering ‘…but where are the women?’. Janice Rhosalle Littlejohn explores this concept in her up and coming documentary called “…but can she play?”  Janice, an award-winning columnist, highlights the careers of at least 10, successful female horn players in the jazz world. Each of these women have a story to tell about not only their art, but how they are received by audiences around the world.

Janice Rhoshalle Littlejohn has had a diverse career as a journalist covering all facets of entertainment, arts, politics, community news and issues related to women, African Americans and the African Diaspora. She spent 12 years as a freelance writer and worked as a columnist for the Associated Press. She’s received numerous awards including a commendation from the National Association of Black Journalists. She is also co-authoring a book for Simon & Schuster and developing a limited series.

Tune in Tuesday, May 24th at 9 PM Eastern, 6pm Pacific to www.party934.com, 94.9 FM HudsonValley, NY to hear Janice Rhoshalle Littlejohn, director of “…but can she play?”, because “jazz is not a gender; it’s a groove”.

Visit …But Can She Play? https://www.facebook.com/butcansheplay. 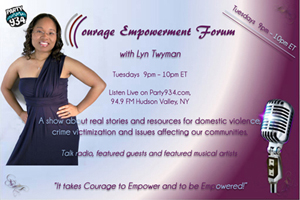 You can listen to previous broadcasts of Courage Empowerment Forum by, visitingwww.courageempowermentforum.com