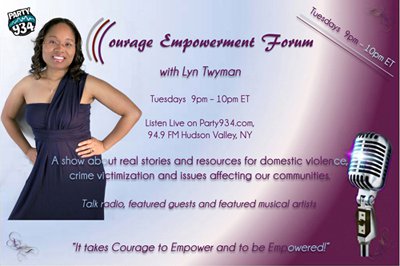 It is estimated that more than one in 100 adults in the United States is in jail or prison. On the March 8th broadcast of Lyn Twyman’s Courage Empowerment Forum, our featured guest will be Pastor Princeton Holt, writer and director of One Hour 2 Live and President of Soul of DAWN Performing Arts Troupe. One Hour 2 Live is a stage play about a gang member on death row at his last hour of life when he is visited by the spirits of the people he has killed. We will explore Princeton’s inspiration in creating this work and how we can prevent our young people from living a life of crime.

Our featured musical artist will be Michael Manson, renown smooth jazz guitarist who has shared the stage with musical greats such as Al Jarreau, David Sanborn, Roberta Flack, Joe Sample and Kirk Whalum.

Princeton. H. Holt is the Pastor of DAWN Minisitries in Brooklyn, NY and President of the Soul of DAWN Performing Arts Troupe. He has pastored churches in the Southeast, South Central, Lake Region and presently in the Northeastern part of the country. He has ministered to at-risk youth for the past 40 years and has been responsible through the grace of God in seeing hundreds of youthful lives transformed.

The performing arts has followed his ministry from its inception and continues to be a major part of his life and passion.

With the release of his previous CD, The Just Feelin It . Michael Manson joined the ranks of today’s premiere jazz artists.

His first single “Coming Right At Ya” reached the top 10 on the R&R Smooth Jazz. Bass-master Michael Manson moved from sideman to center-stage on his solo debut The Bottom Line.

His passion and precision are displayed with both unrelenting power and laid-back grace on the album that, he says, “reflects the deepest expression of all I have felt making music for the last twenty years.”

On Michael Manson’s new CD “Up Front”. It, he is credited for writing and production. For this album Michael has collected the who’s who of Smooth Jazz: Rick Braun, Kirk Whalum, Jeff Lorber, Brian Culbertson, Nelson Range, Norman Brown, Paul Jackson Jr., the legendary George Duke and many more great jazz musicians. This album is a great mix of contemporary jazz, R&B and even a little gospel.

Manson’s association with George Duke ultimately led to the gig of a lifetime. George, who was the musical director and a featured artist on the Montreux Jazz tour (summer of 2000), invited Manson onboard, where he shared the stage with his greatest childhood hero, Al Jarreau, along with David Sanborn, Roberta Flack and Joe Sample. Pal Kirk Whalum said with typical good humor, “After that tour you could have retired.” But Manson is just getting started. Through Kirk, he met Larry Carlton and toured with him before and after his chart-topping Fingerprints album. Kirk also included him on his “Hymns In The Garden” album that garnered a nomination for Best Pop Instrumental Album at this years Grammys. Manson has shared the stage with Warner Bros. Records artists Larry Carlton, Kirk Whalum, Boney James, Rick Braun, Kenny Garret, George Duke and Kevin Mahogany. Other Warner artists featured on the album included Fourplay (with bassist Nathan East), Bob James and Gabriel Anders. Released in October of 2000 to critical acclaim, it is being followed by a DVD release in 2001.

For Michael Manson, love of musical communication, exploration, collaboration and celebration is clearly what it’s all about. This sophomore release reflects Manson’s unabating passion with joy and inspired artistry, “There are musical conversations that are intriguing and I hope the audience shares in that. But it is just great for musicians to communicate in that way. That’s the joy of music. To make great music like that every night, that’s what it’s all about.”