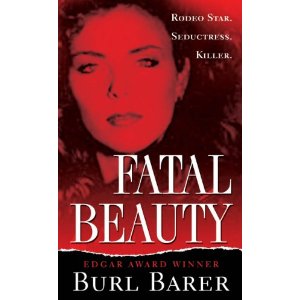 She Offered Her Body…Jimmy Joste was a powerhouse in the oil and gas industry, but he was a weakling when it came to his gorgeous, athletic, longtime lover, Rhonda Glover. Addicted to her sexual prowess and madly in love, Joste gave her homes, cars, cash, and a $350,000 engagement ring.

…But Left Him As A Corpse

Their fifteen years of passion and excess ended the day Rhonda drove directly from a shooting range to the Austin home they once shared. After pumping ten bullets into him from a Glock 9mm, she stood over Joste’s blood-splattered body and shot him six more times—twice below the waist.

According to Rhonda, Joste was violent, abusive, and threatened her life. Here, for the first time, are Rhonda Glover’s shocking stories of drug-crazed devil worship and sexual perversity. But in a packed courtroom, prosecutors presented shocking evidence that beautiful Rhonda didn’t act in self-defense—it was hot-blooded murder!

Barer’s HEADLOCK, the first Jeff Reynolds Mystery, was released to rave reviews in August 2000, and Kensington Publishing released his non-fiction true-crime book, MURDER IN THE FAMILY, the same month as part of their Pinnacle True Crime series.

HEAD SHOT, another true crime for Pinnacle, published in October, 2001, followed by two more best-selling true-crime books, BODY COUNT (2002) and BROKEN DOLL (2004).  STEALTH (2005), a futuristic action novel based on the film of the same name, was written especially for the Japanese market.  Barer’s MOM SAID KILL (2009) was featured as an hour special on I.D.’s DEADLY WOMEN television series.  FATAL BEAUTY, coming in January 2011, was the basis for an episode of SNAPPED on the Oxygen Network.

Barer co-hosts the award winning TRUE CRIME UNCENSORED radio program on Outlaw Radio, serves as consultant on the new SAINT television series produced by Sir Roger Moore and Wm. J. Macdonald, and is currently writing RETURN OF THE SAINT, an all new Simon Templar adventure for the Estate of Leslie Charteris, creator of The Saint.