Mobsters, Gangsters and the Gambino Family! 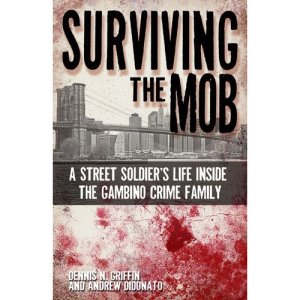 “Surviving the Mob” is the true story of former Gambino crime family associate Andrew DiDonato. In his own words, you’ll learn how organized crime has changed over the years. From the early days when family members were considered to be men of honor, to the post-Gotti era where the bosses are concerned only about themselves; and loyalty runs strictly from the bottom up.

You  will be astounded learning about life in the Mob from a street soldier’s perspective. Andrew  lived in a world where there are few winners or happy endings. He’ll tell you what happens when you make wrong choices in your life and start down a road from which it is very difficult to turn back. You’ll come away realizing, just as Andrew does, how lucky he is to be alive.

Yes, Andrew survived the Mob. But many of his friends did not. And even though he is alive and free today, those poor choices cost him his family, friends, and his very identity.

Dennis Griffin has written several mob related books dealing with the earlier days of the Mob in Las Vegas, including Battle for Las Vegas and Culotta available online at Amazon.com and local bookstores.

Surviving the Mob is scheduled for release before Christmas!  Pre order your copy today at Amazon.com!   CLICK HERE

Dennis Griffin is available for speaking engagements, book signings, and workshops.  To schedule Dennis for you next event contact: